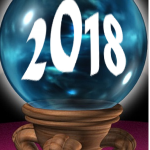 So what will 2018 bring to us all in the areas of cyber security and data privacy/protection? I had a go at this predicting thing last year and you can see how I got on here.

With reasonable results, I thought I’d give this another go. So I’ve wet my finger-tip & held it aloft, cast some dice, read some tea leaves and consulted my inner oracle and here goes my best guess.

What will 2018 bring? Here are 5 Predictions

1. There will be another large scale incident on a similar scale to WannaCry

Every year there are really large attacks using different methods to cause problems. In 2016 we saw huge floods of data attacking online services. This flood was caused by poorly secured internet connected security cameras. 2017 saw Ransomware worms in WannaCry and Petya/NotPetya. The latter of these was quite ingenious in the way it worked, as it used different methods to move around networks, once it successfully infected a machine. I’m going to guess that we’ll see something of similar complexity being used, perhaps in a more targeted way – possibly by way of altering a widely used application’s source code and lying dormant until activated.

2. Past Data Breaches will impact victims financially on a large scale

With so many data breaches occurring throughout 2017 (and for years earlier), there is a huge amount of useful and usable data that the evil doers can, if they used some big-data methodologies, mine to extract and target individuals and hit them financially. It’s not credit card numbers I’d be worried about, as the issuers are fairly good at catching fraud and protecting the card holder. It’s all of the other information that could be used to craft a very convincing e-mail/letter/WhatsApp message that will cause the victim to send money to the bad guys.

3. GDPR will cause a big Facebook-type company to be fined

I suspect there are individuals out there waiting in the long grass for May 25th 2018 to roll around so they can launch all manner of subject access requests on various companies and government departments that they don’t like. Just to be a nuisance. I do, however, expect that some large global corporation, that has a lot of personal data on a huge number of people, will end up being investigated and, either in 2018 or 2019, be levied a massive, multi-million Euro fine. But they will fight back and hold up the imposition of the fine for a number of years. They may even expose flaws in the GDPR legislation.

If BitCoin is still a valuable thing in 2018 (and hasn’t crashed and burned), I expect the evil doers will be doing their best to hack the BitCoin block chain in order to steal some of that sweet, sweet virtual currency.

5. Data breaches will see a massive increase in reporting in Ireland

While there have been data breaches reported in Ireland, they are few and far between. However, I fully expect that the requirement to report data breaches to the Data Protection Commissioner under the GDPR, will cause an increase in the reports of data breaches occurring. I have a useful short video here showing that there are many different types of data breach that might need to be reported.

Happy New Year to you all!

I’ll come back in 12 months and do another review to see how I got on.

In the meantime I wish you all a Happy New Year and I hope you are all safe and secure in 2018.