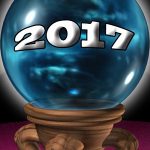 I don’t see many people who make predictions for the coming year actually come back to review what they predicted. I’m not one of those though, so here is my review. I’ve included the original text below in blue, but the full article for my 2017 predictions is here.

This might be an easy one to get right. Ransomware is already embedded in over 90%+ of all phishing e-mails, so there’s hardly any further room to keep growing. We’ve already started to see the way it is changing though. As was reported earlier this month, you could get your files unlocked if you infected two friends with this Ransomware rather than paying money over to the hackers.

I haven’t seen the stats yet, but I suspect Ransomware is still as big a problem as it was 12 months ago. And as noted, the evil doers have started using new methods to get money out of people by hijacking the victims computer processing power to mine crypto-currencies (i.e. create new currency for them). We also had the scary prospect of Ransomware worms thanks to WannaCry and Petya/NotPetya. So I’m going to say I got this one right.

We’ve seen record breaking botnets created this year by poorly designed and poorly secured smart devices (also referred to as IoT, e.g.- internet connected cameras, digital video records, internet routers, etc.). I suspect the evil doers are building a massive army, much bigger than anything we have seen to date. I believe that they will then carry out a coordinated attack on one of the big service providers (e.g.- Google, Amazon or Microsoft). The attack won’t be fully successful, but will have caused sufficient disruption to make smart device security a focus for all manufacturers of such devices, as insecure devices will be banned from accessing the web.

This was a miss. While attacks did take place, there was nothing on the scale that we saw in 2016.

3. There will be an even bigger data leak than 2016’s revelation of the Yahoo! world record leak

Yahoo! has really had a bad year, setting a world record, having already had an even bigger world record. I believe bigger leaks have already happened and will be revealed next year. I reckon the bad guys are already combing through the data, cracking passwords and will then create tools that will take the IDs and passwords they have and try these against other services (e-mail, social media, etc.) to generate a list of compromised accounts, which are extremely valuable on the dark net.

I got this one right. It was Yahoo! that did it again, with over 3 billion records breached.

4. Russia will be accused of interfering in elections occurring across Europe

Russia has shown form this year, interfering with the US Presidential Election. With elections happening in the bigger European Countries (Germany, France and The Netherlands) in 2017, I would not be very surprised to discover that the Russian state hackers tried to influence the results of these.

While the German and Dutch elections were not outwardly (at least) subject to the same issues as affected the US elections, there was an incident during the French elections which looks likely to be an attempt to influence the voters. A dump of campaign documents including emails and accounting records for Emmanuel Macron’s campaign was released just before a moratorium on communications came into effect. So I’ll take a partial on this one.

5. More Irish people will be protecting themselves from Cyber Threats

I’ll be a bit selfish with this one as I will be the one helping these people to protect themselves. People knowing how to stay safe on-line will be the least likely to be affected by a Cyber Threat.

While I did protect more Irish people in 2017 by educating them, it wasn’t as many as I would have liked. So, again I will take a partial on this one. A little something called the GDPR became more important to people so, in conjunction with Molly O’Neill, we created training and awareness programmes for businesses.

Results for my 2017 predictions