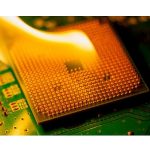 You probably can’t have missed the reports about the cyber-Armageddon that are circulating today. Two very significant vulnerabilities have been found in the processor chips that are used by nearly every single computer, tablet, phone and smart toaster. This includes Mac OS X on Apple computers. These vulnerabilities have been given names. One is called Meltdown and the other Spectre.

I’m not going to go into any technical detail on these vulnerabilities. If you want to read the technical side you can go to the team that discovered the problems, Google’s Project Zero. There is some less technical information available on a dedicated webpage for the vulnerabilities. I’ve put in some easy to read background on this in the discussion section below.

What do you need to do about Meltdown NOW:

First of all DON’T PANIC. This is not the end-of-the-world. The situation is serious, but there are currently no active exploits out there. So keep a cool head and this can be managed successfully.

Steve Gibson, a renowned security expert has created an excellent free little tool, called InSpectre for helping people to understand if they are protected or not from the two vulnerabilities. It has other useful advice there too. I would suggest you download it and run it against your Desktop/Laptop and see what your exposure is. Link to the download page is here.

I hate to say it, but you need to patch and patch everything as soon as you can. Warning: Make sure patches/fixes come from their usual sources and not by somebody sending you an e-mail with the patch. That won’t end well for you.

I would not be at all surprised if there will be multiple patches emanating from Microsoft over the next week or two in respect to this.

I use services in the cloud, am I affected?

Absolutely. However reports are that Amazon and Microsoft are busy working away patching their infrastructure. There are a LOT of other other cloud services out there, so please check with them to see if you are in anyway exposed to these bugs.

When I check Twitter each morning, I normally see about 10 or 20 tweets from overnight. This morning it was hundreds of tweets. The cyber security world has gone into overdrive in the last 24 hours. I was seeing rumours of an Intel processor vulnerability circulating yesterday and then the disclosure broke overnight. It seems that they were trying to hold off until next week, in order for more work to be done on issuing fixes, but it was leaked. So now there is the scramble to get the fixes out there as fast as possible.

The Meltdown bug is poorly named, as it is not going to “melt” anything (ignore the picture I’ve used for this post I just liked the look of it ?). What it does is it breaches protections between the operating system (e.g. Windows) and Applications that are in use (e.g. Excel, Sage, etc.). The bug enables a malicious program to get at parts of the computer memory that stores sensitive information, such as passwords. Once it has this information it could send it to the bad guys. This vulnerability is relatively easy to exploit and proof of concept exploits have shown up in the wild.

The Spectre bug is not as easy to exploit as Meltdown, but it is also not as easily fixed. It works by breaking the isolation between different applications, which enables an attacker to fool normal computer programs into revealing sensitive data that they have in memory. The current discussion on this indicates that to truly protect against Spectre, hardware may need to be replaced.