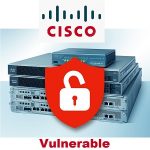 It emerged last week that a security researcher had made a very significant discovery, which showed that popular firewalls made by Cisco had a vulnerability that was scored a perfect 10 out of 10 on the CVSS (Common Vulnerability Scoring System) scale. The vulnerable Cisco firewalls are in widespread use and they need to be patched urgently.

As is usual, the vulnerability lies in the software that runs on these firewalls. This Adaptive Security Appliance (ASA) software is what has been found to be vulnerable by a researcher who was to present his findings at a security conference in Belgium last Friday. He hasn’t released all of the juicy details yet and there are no reported exploits in the wild, but that could all change.

The affected devices, according to Cisco, are:

If you have any of these devices in your network, you should be getting your IT support to patch it as soon as possible. There were reported issues with the initial patches, but Cisco have now rectified those too.

The big concern was to do with the Virtual Private Network (VPN) component on the firewall. If you are able to connect in remotely to your network by way of this VPN, then your entire network is at risk of being compromised.

Of course you’ve been following Commandment 3 and have a firewall in place. Now you’ve also got to employ Commandment 1 and keep it updated.

For the technical types who are reading this, you can get a much more in-depth view of the vulnerable Cisco firewall issues on a blog post by Omar Santos.